So, a little while back, I did a blog post on villains.(Here's the link the Part One And I promised a Part 2 because, well, I just couldn’t finish the whole thing in one non-tome-length blog post. So, here ‘tis. Writing Villains: Part Two. We last left off at villain sub-types…


C. The Villain Everyone Wants to Hang Out With, Cause They’re Charming or Hilarious

So, calling Snape a “villain” is kind of innacurate, and I bristle at anyone who calls him such, because I’ve had a love for Snape ever since book 1. Even when everyone hated him, I maintained my undying love for the man. But, no matter your Snapey persuasion, he was most definitely an antagonist to Harry. The thing about Snape is, he’s a jerkface. But he’s charming. And most of all, he’s hilarious. I’d say Scar falls into this category. The intellectual, witty villains who you’d kind of like to hang out with for an hour just to see what horribly hilarious things they’d say to. And then, you could go home and cry, but it would be worth your tears. Yeah, this is them. (My personal favorite type of villain, by the way.)

D. The Villain who’s such a Bad-A That You Love Them for Being Awesome (or Terrifying.)

When we first met Klaus, who wasn’t shaking in their seats? I know I was. (Though now, I'm kind of in love with him, despite the fact that he'd, well, the pinnacle of all evil.) This dude is crazy, and so COMPETENT and terrifying and awesome that you know, if he intends to kill someone, they’re dead. Period. I love a competent, terrifying villain. If that doesn’t raise the stakes, nothing will. A villain who can get the job done, always, and their job is ruining your MC’s life somehow? Scary times. (Also in this category, Malifecent, Hannibal Lecter in Silence of the Lambs)

E. The Baddie Who Gets Redeemed


(Do not imagine him pansily yelling NOOOOO in this picture. He didn't so it in the original.)
Okay, I admit, I love a crazy villain who gets redeemed. Good old Vader tops that list. The one who, in his final hour, shows that he is in fact, a compassionate human being. I was told once that in a story even your bad guys should get better by the end. Because everyone wants to see people become better people. Now, I don’t agree with this in all cases. BUT, it can be a powerful tool. And who doesn’t love a redemption story? This also serves to make your villain not just a villainous tool, but a human.

THERE ARE VILLAINS who do not fit these types. But usually they don’t get much screen time. Cause you hate them. If I had to see Dolores Freaking Umbridge one more time in Harry Potter, I was gonna flip my lid. Now, Voldemort, I can roll with, but look: 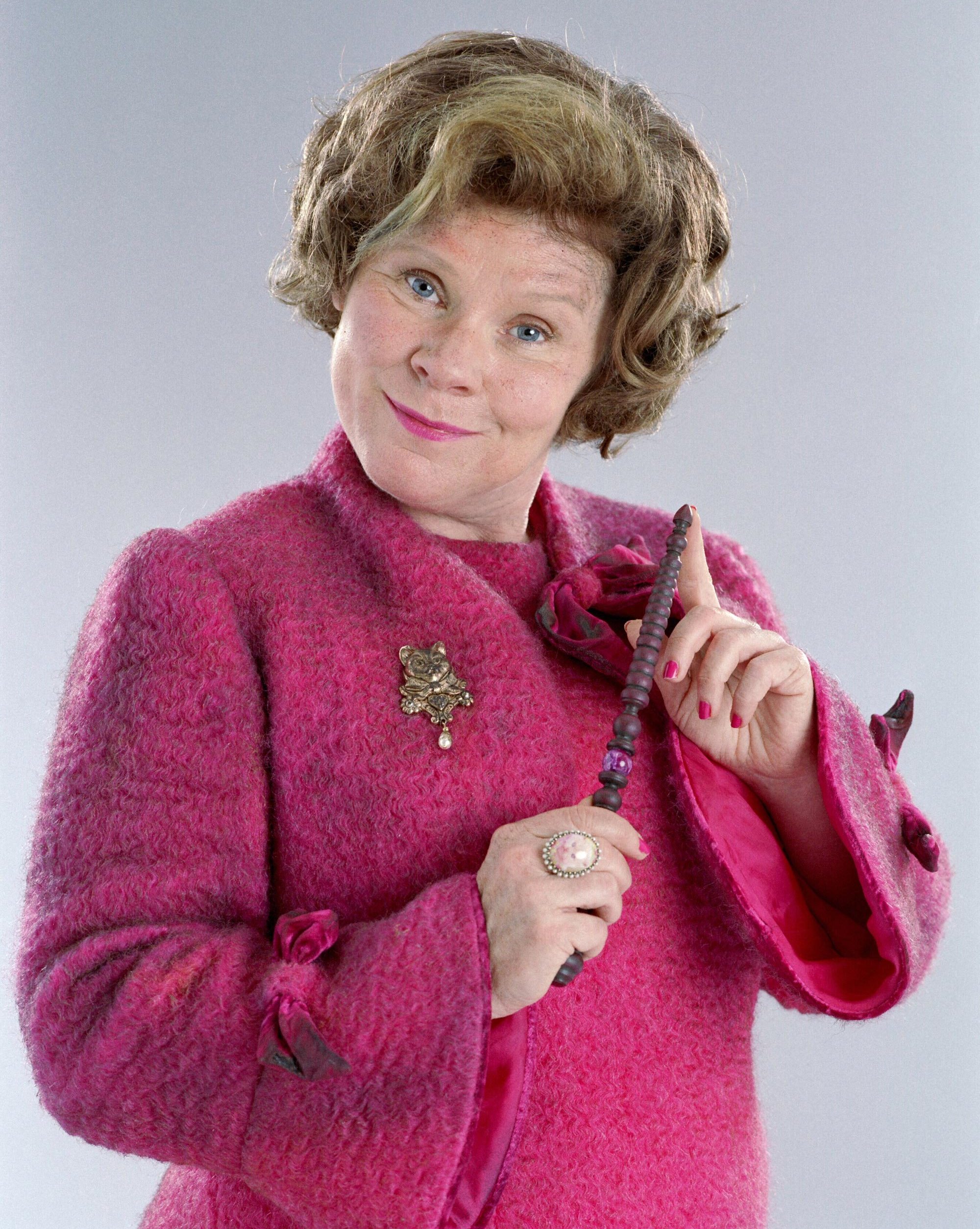 Just looking at her pisses me off. I don’t know how I survived looking for a gif of her. And for the love of all things bright and beautiful, if your villain is as freaking hateable as Dolores, LET YOUR FANS BE HAPPY AND DO SOMETHING AWFUL TO THEM. PREFERABLY DEATH. Otherwise, they will still be rage-y about it years later. *grumbles*

3. Final Point-Get Into Your Villain's Head.

Personally, I love villains so much that my favorite thing ever is not necessarily when people say “Awww, your MC!” I love it when people say “GAH. I HATE THAT VILLAIN SO MUCH.” Dunno why. I’m twisted, I suppose. But ultimately, your villain is a character too. He or she is a person, just like all your other characters, and your goal is to create a person.

Just as your main character is consistent in the way she thinks and why she does what she does, so should be your villain. Don’t have him burn down and orphanage unless that person would truly burn down an orphanage. And if that messes with your plot, well, fix your villain or fix your plot. But it’s all about consistency, getting into your villain’s head enough to make him real.

And that’s all she wrote.
Posted by Brianna Shrum at 7:13 AM 6 comments:

Guys, contests are cool. They're kind of my crack. Brenda Drake got me addicted back with Pitch Madness in August....when I was just a baby with my very first manuscript who didn't know a query from a synopsis, an MS from an MC, and I had no idea what the heck a CP was...fast forward a bit. 1 more contest later. On October 31st, I realized I had about 30,000 words written on my newest WIP. And  about 50,000 to go. So, I decided to be crazy and do NaNoWriMo. And, to my shock, I finished! I got in 50,000 words and finished my book (Never, Never) by the end of November.

Then came PitchWars a couple days later, where I got a fabulous mentor, known to some as Fizzygrrl and some as Summer, who helped me put all the finishing touches on Never, Never. I had a few requests from that, which was super exciting. Before the Pitch Wars pitches went live, since I was all high on contests, I happened to come across a twitter pitch event called Pitch Bree, and thought Hey! Why not? She requested (Another woooo) and I sent in my manuscript...Fast forward again, to about 2 weeks later...

So, it was a Monday like any other Monday...I was sittin at my laptop, obsessively refreshing my Yahoo email, like I do, and then, in came an email, the likes of which I hadn't seen. The subject line read..."Re: NEVER, NEVER." And it was from this super fantabulous agent. So, naturally, I assumed, Oh great, another rejection. When I clicked on it, I was all:

But thennnn, I read it. And, to my shock 'n awe, it DIDN'T say, "Hey, your book sucks." What it actually said was "I'd love to offer you representation." At this point, I went from this:

And finally, to this:

Yup. I cried a little bit. I'm emotional. When I called the hubs, he thought something was terribly, horribly wrong. But it TOTALLY WASN'T. So, we emailed back and forth, and she told me to call her THAT DAY cause she was all excited! After my child finalllly fell asleep, I called her up (after staring at the phone for like 5 minutes) and she said all these fantabulous amazing things about my book, and basically every thing she said was perfect. And I'm pretty sure that all I said during the entire conversation was "Awesome," several times. I mean, I asked her questions and stuff, but basically I forgot all the words. I'm sure after we hung up, she was like, 'Man. That girl used up her entire vocabulary in her book, and now she's forgotten English.' But she was nice enough to not say those things. So, you know, that was good.

Utilizing much more self-control than I usually possess, I coolly said, "Okay, well, I'll get back to you in a week. Awesome." Cause my mind kept telling me over and over:

This picture pretty much sums it up...
On the left: How I acted like I felt.      On the right: How I ACTUALLY felt.

But, about 15 seconds after I hung up the phone, I desperately wanted to call her back and be like:

I didn't though. I forced myself to wait until the next Monday. I got an offer from one other agent,from Pitch Wars actually, which I really appreciated, and several of the nicest, most encouraging rejections ever, i.e. "bowing out."
But ultimately, I couldn't get that first agent out of my head. She was just soooo enthusiastic and upfront about everything, and so cool. She really *got* my book. Everything about it. And she believed in Hook. At one point, she said, "I hope you sign with me, but even if you don't, I'll totally support you. No matter what you choose, I just wanna see this thing on the shelves." And that kind of awesome is tough to beat, folks. Sooooo, I signed with Bree Ogden of D4EO Literary.

Yup. You can just call us Bri-squared. That concludes that, readers. I have an agent.

The Stats, (cause it seems everyone loves stats)

Queries Sent: 15
Partial Requests: 4
Full Requests: 9
(Note: A lot of these requests were not from actual queries, so the ratio of queries to requests was a lot lower than the stats suggest.)
Offers: 2

GIANT thanks to my lovely CP's and betas: Nazarea, Rachel, Tabitha, Darci, Carol, Juliana, Stacey, and Chase (my brother, as well as writer/CP :-)) And a couple others who went out of their way to help me out or give referrals, or awesome things: Cat and Steph.
Lastly, HUGE thanks to my lovely and awesome Pitch Wars mentor: Summer Heacock, who has basically been one giant fizzy ball of encouragement and help!